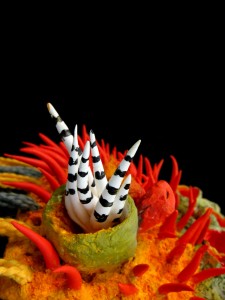 The following are five Maasai-inspired neck pieces which I created in late 2012 and early 2013.

While living in Kenya in 2007, I became fascinated by the Maasai people, for their very distinctive dress and jewellery, and the rich and beautiful biodiversity that is found in Kenya and other parts of Eastern Africa.  I was particularly struck by the Maasai’s beautiful beaded jewellery and circular necklaces.

Combining this experience with the Indian Ocean influence and my background I decided to integrate my oceanic reefs’ research with the concept of circular Maasai necklaces. To represent the multiple layers of necklaces normally worn by Maasai woman, I sculpted sea anemones on my pieces.

Each neck piece is unique. Instead of using colours and geometric forms found in the sea world or in original Maasai artwork, I painted my necklaces in the distinct colours of exotic birds found in the Kenyan forest;  in contrast the delicate urchins’ primary spine give the illusion of layering and of birds’ feathers.

Most of my pieces have bright colours as in the Maasai culture each colour has a meaning: blue for the water that gives life to the grass and cattle; green representing land, grass and health; yellow and orange signifying hospitality; and black for life’s hardships. Wool was used to balance each neckpiece and to replace the long-beaded strings which are generally used in the traditional Maasai necklaces.