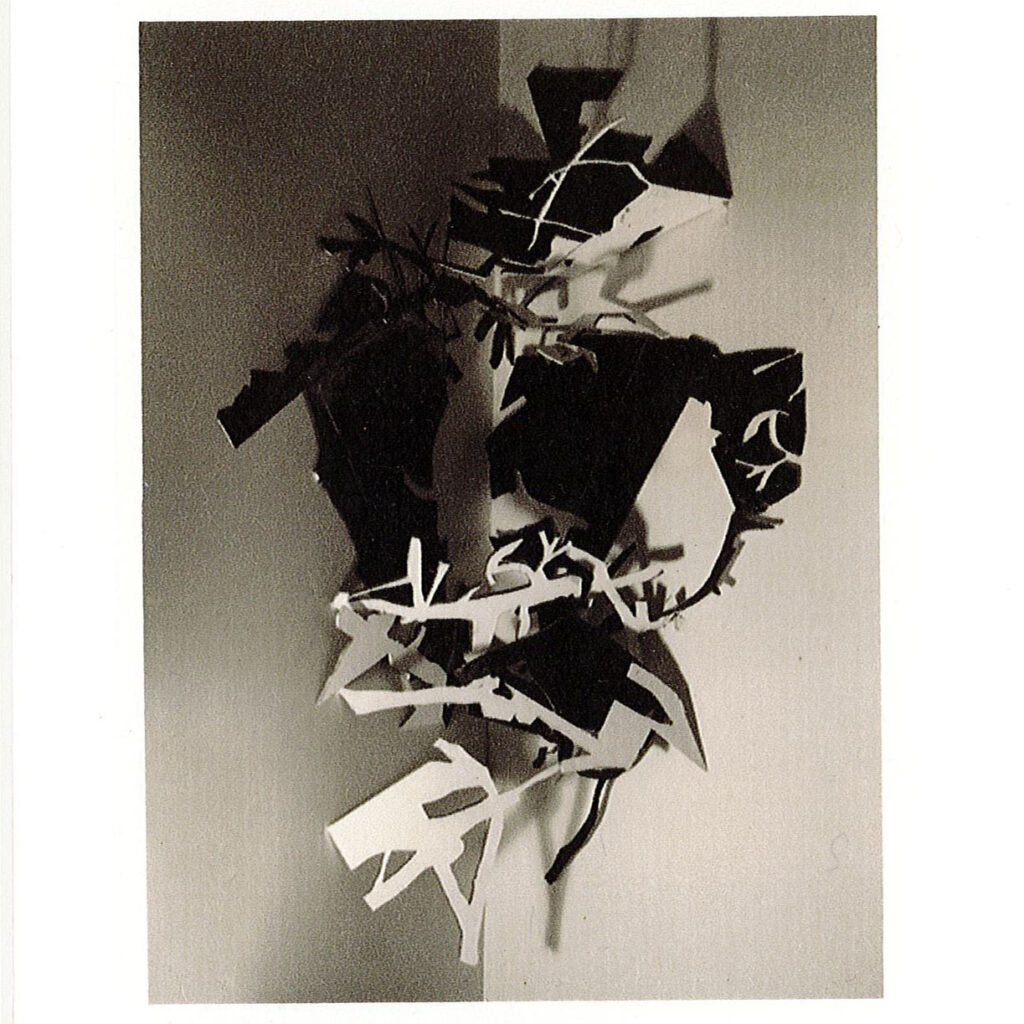 The “Cornered” series utlizes the natural forms (twigs, branches) found in the Boreal forest outside my studio. Tranferred to board, they are cut and reassembled for photography to create three-dimensional calligraphy – interconnected movements and rhythm.

My intentions is to explore theme of contained energy and interdependence in a weightless sculptural stage.

Well, at the beginning, it was a perfect opportunity to combine handwork and photography together. I really fell in love with the beauty of the rich blacks of intaglio. In the pure, growing whites of the paper, and the glistening white surface of the paper, it suited my sensibility. It was tactile, and it was a very slow process. And relaxed relationship between the quality of the light of the photograph and the solidity of mass volume of sculpture really attracted me. — Karen Dugas

Influenced by Surrealism, Dada, and film and advertising imagery, Karen Dugas creates analogue prints and monumental digital murals. Born in 1957 in Cornwall, Ontario, Canada, she earned a B.F.A. from Queen’s University in Kingston and a M.V.A. from the University of Alberta in Edmonton. She has taught printmaking at the University of British Columbia and the University of Alberta. Dugas says she wants “to create allegorical works which question notions of personal identity as well as our collective relationship to the natural world.” She has had 14 solo exhibitions and has shown in over 150 national and international competitive exhibitions, winning ten awards including: Jury Prize, 16th International Biennial of Graphic Art, Ljubljana (1985); Superior Class Prize, Fifth International Print Biennial, Seoul, Korea (1986) and a Juror’s Commendation Award at the Edmonton Print International (2008). In 2017, her work was featured in “LIGHT/ MATTER: Art at the Intersection of Photography and Printmaking”, Grunwald Gallery of Art, Bloomington, Indiana, USA; “The Looking Glass”, The Art Gallery of Alberta, Edmonton; “Masterpieces of Contemporary Canadian Printmaking”, ARDEL Gallery of Modern Art, Bangkok, Thailand and “INTERWOVEN”, The KOBRO Gallery, Academy of Fine Arts, Lodz Poland. In March, 2010 she undertook a month-long residency at the Guanlan Original Printmaking Base, Shenzhen, China.

karen dugas was unable to do a video interview, but we were still able to chat with her and she also wanted to share some images of her studio and the countryside around her home:

“Together, the series chords are increased, encourage a filmic interpretation, because when you see them in a series, they’re moving from one to the next, combining digital evolution colliery with a paper and bring new and old techniques together.” — Karen Dugas

The other works submitted :