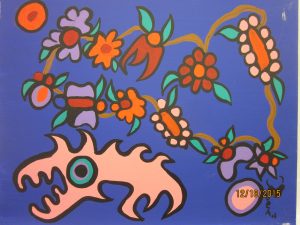 Tom Hogan was born in Sioux Lookout on Oct., 31st 1955. He was abandoned as a baby and adopted by an abusive man. When the courts removed Tom from that home at the age of 12, he was bounced around from home to home, spent time in a children’s psychiatric residential program, and finally chose the road of wandering and homelessness.

He has worked with carnivals, been a migrant vegetable picker, and has spent time in more addiction recovery programs than you can shake a (talking) stick at. Though all of these paths took Tom far from his First Nations roots, it was being incarcerated at Stony Mountain Penitentiary in Manitoba that started his journey back to them. While in prison Tom started studying his culture and the work of some of the great First Nations artists from the area where he was born. Tom Hogan is a self-taught Woodland style artist. His vibrant paintings reflect both his knowledge of Aboriginal mythology and his personal journey. Each work is a testament to his spirit’s ability to transcend the often difficult realities of the human condition.

For the last ten years of his life, Tom lived in The Managed Alcohol Program, developed by The Shepherds of Good Hope in Ottawa. When he entered the program in 2004, he was literally on his last legs: extremely malnourished, suffering from both pneumonia and tuberculosis, and no longer able to manage his addiction. But, with medical attention, nurturing, non-judgmental care and his craving for alcohol managed, Tom put his brush to canvas and he created his art.