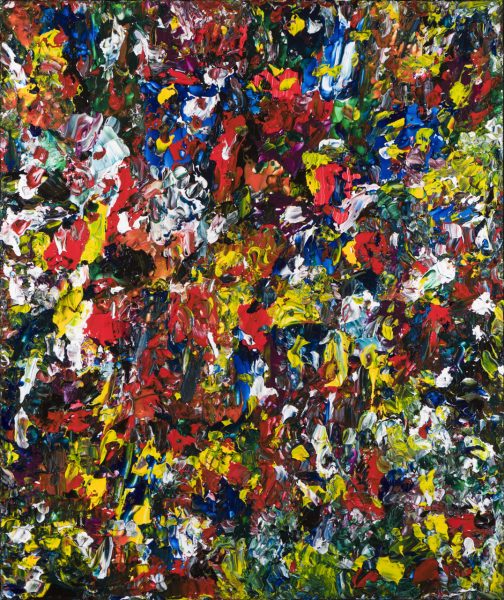 The Four Seasons of Life is an exhibit of abstract paintings. In this sense, it represents a continuum in my work. It is a step forward from my previous Experiments in Light. Transparent colours were then poured and settled into a mirror-like surface. My new work retains luminescent qualities but is now imbued with more strength because of its high degree of texture. The colours are more intertwined and take a life of their own in the few days of the drying process. I still use transparent acrylic paints, mixed with gel, and often now the opaque black, white, and cadmium yellow. The gel, the colours and the texturing tools I use achieve a glowing and shimmering quality.

Because of health limitations, I had been looking for a new style for some time. An artist friend had invited me and my wife to attend a relaxed session with other artists to prod me to find my new style. Among the equipment on the table I contemplated for a while, I chose an old scraper and started freely applying colours, transparent and opaque, in varying directions to a wood panel she gave me. After repeating the experience on a second panel, I strongly felt for the first time that I had finally taken a new turn.

In the two years the present exhibit has been in the making, I have changed from an attempt at ordering chaos to a new attitude of giving chaos the freedom of evolving on its own, both on canvas and in my life.

After some months perfecting the textured approach, I searched for a theme that revolved around colours and tempos to give my works their rhythms. Vivaldi’s music gave me the key.

Vivaldi was first inspired by four of Marco Ricci’s nature paintings and he wrote four sonnets, one for each season, based on what he saw and heard: the birds, the thunder and the storms, the hunt with the cavaliers and the dogs in pursuit, the harvest and drinking of the new wine, and the shivering in the icy snow. Then he composed his best known music still popular today.

Inspired by Vivaldi’s music and nature theme, I got my sense of direction. My original paintings were in Fall colours. Since living in Ottawa in the mid-sixties, this season has come to mean walks in the woods, kids jumping in the leaves, progress and joy in my personal life and career. My Winter paintings evolved from the darkness of the short days, brilliance of the sun and imply the movement and colour of the carnivals. The slow unfolding of Spring in the Vancouver of my youth from its winter darkness and fog into cherry blossoms meant that in the end everything was possible. Summer was and still is the green season we dream of…A time of disconnect and renewal to face the real world again. In the end, the four seasons reflect the nature of life.    David W Henderson

All profits from this exhibit will go to the Ottawa School of Art.

Notice: Artworks at this space and the other exhibit spaces are for sale.

Writing: Author of a dozen short stories and over forty poems published in

literary reviews and anthologies since 1991; winner of the 1996 National Magazine Awards Silver Award for fiction, and of the 1999 Orion Poetry Prize.

Film-making: In the early 1970s, studied film-making at St Paul’s University under (the late) Peter Cock of Crawley Films; did volunteer camera work at Videotron, Gatineau; was member of an amateur film-making group.

Exhibitions: Have exhibited paintings 2003-2009 at the Visual Arts Centre, Orleans; the Orleans Library; the North Gloucester Library; Gloucester Gallery; the Ottawa Little Theatre, and the Ottawa School of Art Boutique and ByWard Gallery. I have numerous paintings now in collections in Ontario, Quebec, the Maritimes, California, Minnesota and France.

Support to the arts: Established a three-year scholarship fund with my wife, Nicole Henderson, for diploma students at the Ottawa School of Art in 2006, still ongoing in 2017, our eleventh year.

Earlier this year the Ottawa School of Art hosted an exhibition of, Ottawa based artist, David W. Henderson’s paintings in its main gallery at 35 George St. in the ByWard Market. The paintings on display here are part of that much larger body of abstract works which are a continuum of his previous work from “Experiments in Light”.   In March 2017, paintings from both series were on display in an exhibition entitled “The Four Seasons of Life”.       Henderson’s work is shaped by sensibilities of fond memories and inspired by the powerful sonnets of Vivaldi: “The Four Seasons”.

For information on purchasing these works, or to see other images of paintings by David W. Henderson, please contact Cathy Brake, Gallery and Boutique Coordinator, at the Ottawa School of Art by calling 613-241-7471 ext. 27 or by emailing boutique@artottawa.ca .